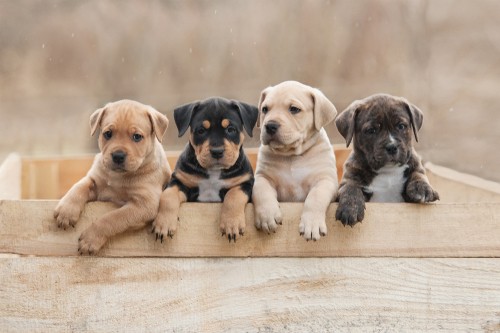 Worms in puppies – the transmission phenomenon

Worms in puppies is a common phenomenon and also occur in adult dogs, cats, and humans. It can transmit easily from pets to humans. Dog and puppy owners need to take extra care when walking barefooted in outside areas shared by your dog.

The irony is that worms that have been lying dormant in the mother’s body are activated by hormones produced in the expectant mother. These worms enter and infect the puppies in utero by passing through the placenta. It almost appears that, as if by design, these worms are determined to remain within their host and her offspring forever! Hookworms and roundworms, in particular, are easily transmitted through the mother’s milk to the lactating puppies once they are born. So even if puppies escape in utero infection, these worms will worm their way into the puppies immediately after they are born!

Worms in puppies – Symptoms and evidence

As we have observed, the worms naturally lodge a two-pronged attack on puppies; while in their mother’s womb, as well as through ingesting their mother’s milk.

Pet owners, therefore, need to look out for symptoms of worm infestation in their new puppy. Possible signs may include blood the following:

Risks associated with untreated worms in puppies and adult dogs

Whereas an adult dog infected with worms, may display any of the above symptoms but remain resilient, the same worms can prove fatal to a puppy if not treated timeously.

Taking your dog or puppy to a veterinary clinic will not only ensure the elimination of all worms but also save them from much discomfort. However, the one worm that can cause serious harm in a dog is the heartworm.

These worms are a danger to your dog because it survives in the bloodstream and travels to the lungs and heart of its host. In the long term, it is prudent and in your adult dog’s best interest to speak to your veterinarian about a monthly dosage of deworming medication to prevent every kind of worm infestation in your pets.

Deworming process for worms in puppies

Veterinarians agree that puppies have to be dewormed as soon as possible after birth. The deworming process is not a once-off but takes place with 2-week intervals during the first twelve weeks of the puppy’s life after that quarterly deworming should be sufficient to keep your dog healthy and worm-free for life!

Don’t be shocked or doubtful when you see some worms in your puppy’s stool even after the deworming process. According to animal health practitioners, this is due to some deworming medication rendering the worms paralyzed so that they can then be eliminated naturally in your dog’s stool.

However, not all worm infestations are evident in dogs and puppies. Worm eggs can lie inactive in your pet’s body and activated when your dog is under stress or when a female dog is pregnant. Her hormones activate the dormant eggs or larvae. Unfortunately, the deworming medication is unable to destroy the worm eggs or larvae in pets.

Worms in puppies – The different types of worms analyzed

Heartworm Disease as a cause of worms in puppies

Vitamin A is also known to counteract worms in puppies and older dogs.

It is also known to destroy parasites, one of which, giardia affects dogs and cats.

Boosts the alkaline levels in the intestines, which makes it uninhabitable for parasites and worms. It has many additional health benefits for dogs.

It is known for its soothing benefits. It soothes inflammation and discomfort experienced by puppies and dogs infested with worms. Effectively eliminates roundworms and whipworms.

Turmeric contains four anti-parasitic compounds effective in the elimination of worms in puppies and dogs. It creates a hostile environment where worms and parasites cannot survive.

Measures to prevent worms in puppies

Boosting the immune system of your puppy is essential right from the start. As your puppy develops, it is less likely to attract worms and other parasites.

A dog with a healthy, strong immune system will naturally eliminate parasites and worms.

The intestinal tract forms around 80% of your dog’s immune system. Hence, feeding your dog a healthy balanced diet is a great deterrent for worm infestations and illnesses.

Keep your dog’s immediate environment, hygienically clean and free from and feces.

You can safeguard your puppy and adult dogs against worm infestations by purchasing an excellent approved source of deworming medication.

Safeguard Canine Dewormer comes in granule form and can be easily mixed with your dog’s food. It is safe to treat worms in puppies from 6 weeks old.

Now that you have gone through this article, you should know everything related to worms in puppies and how to treat them. In case you don’t see improvements in your puppy after following the tips mentioned in this article, consult your vet immediately to get an effective remedy.